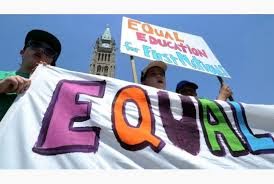 http://indiancountrytodaymedianetwork.com/2013/03/29/native-children-ask-equal-rights-letters-canada-video-148457
What is the Big Idea in this article and video? Make sure to site examples from the text and video.  Make sure to include your personal opinion.
Posted by anotherfinekettleoffish at 2:32 PM

The big idea in this video is that native american children are being: neglected, discriminated, and taken from their natural homes to be put into foster care were they lose their culture and heritage. I belive this is not right and this should stop. This is so important that it has been brought to a tribunal and 3 million dollars are going to avoid the tribunal. This unright treatment of first nations is wrong and should be stopped.

The video was very deep, it showed that even people who aren't affected by cruelty to the Aboriginal people know about it, & they don't support it. In fact, they are attempting to stop it, because a lot of canada does care, & that's really heartfelt. I think it's great that people have the courage to stand up & support each other & themselves.

After watching this video I Have come up with the following.The big idea of this video is to help with spreading awareness of the poor conditions of first nations children, and the poor quality of the resources they recieve. Another Thing the video said is that it takes a community to raise a child, if we prevent the community to help with the teaching, the religion and ways of life will be eventually lost, or warped out of proporsion and not true. First nations children are Just like regular people, who cares about nation, religion, skin tone or voice? You judge a person by there character, not there visual apperance. If a person is abused due to there nationality, I think that that is wrong and it shouldn't happen.

The big idea in this video is that everyone should have equal rights and that no one deserves to be forgotten. These children are being removed from their homes and taken in to foster care and they forget who they are, their identity, and their culture. What these people are saying is that these children should be given the proper care and schools for them to grow up in and for them to have the exact same rights as everyone else. For example one person said “The first nation’s people are living like the people in third world countries.” That is really bad! I think these children SHOULD be treated the same as us and have the same rights and have schools and everything to live the life they should live.
-Lindsay

I think the big idea is that Native Children should have the same rights as other children in Canada. They also should not be taken from their community. They do not just depend on their parents, but on the entire community. A quote from the video is:
"We are all one big family."

My opinion is the same as the main idea.

The 'Big Idea' of this video is that the First Nation People are being discriminated by the other people of Canada. Discrimination is when somebody is denied I right that somebody else has because of things like age and race(skin colour). These First Nations people are being denied what they require, and are being taken from their homes into other Foster Homes. I tghink this is terrible, and the government HAS TO STAND UP AND DO SOMETHING. I am personally all for this issue being brought to a tribunal, and I hope the First Nations get their rights.

The big idea is also that the First Nation People are being mistreated.