Where in the World? Due - Thursday, April 21st. 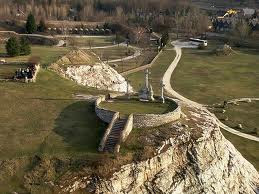 Posted by anotherfinekettleoffish at 10:51 AM

Think about the true meaning of Easter.

Golgotha, also called Calvarys is a skull-shaped hill in Jerusalem, the site of Jesus’ Crucifixion. It is referred to in all four Gospels.

The hill of execution was outside the city walls of Jerusalem, apparently near a road and not far from the sepulchre where Jesus was buried.

Its exact location is uncertain, but most scholars prefer either the spot now covered by the Church of the Holy Sepulchre or a hillock called Gordon’s Calvary just north of the Damascus Gate.

PS
Thanks Mrs OHara for that clue. It really helped. I surely would have been totally and uterrly lost without that clue. Although there are three crosses in the picture so that must mean something...

This weeks "Where In The World" is "Golgotha." Golgotha is where Jesus died (and in more technical terms was crucified) and was buried. It is on a small hill just outside of Ancient Jerusalem. We celebrate Easter which was when Jesus was crucified on the cross. In the gospel it states that Jesus had two other crosses on either side of him with a man on each that had been crucified but had already "decended to the dead."

who said that this was a bowl of soup? it doesn't even remotely look like a bowl of soup! and that's really disprepectful to it's true being.

This weeks Where in the World is Calvary Hill, the place where Jesus died on the cross. This place is also known as “The Place of the Skull”, or “Golgotha”. This place is not far from where Jesus was buried and rose. It is in Jerusalem, Isrial which is pretty obviouse. Well, it isn't really in Jerusalem, but just outside of there. Golgatha is a skull-shaped hill where many out laws (and some non out laws- Jesus) were crucified. There are no exact coordinates, but people think it was on the spot where the Church of the Holy Sepulchre is now.

Our WITW this week is Calvary hill. This really ties in with easter because it is where Jesus died on the cross. It is just outside of Jeruselum. the hill is also skull shape, creepy isn't it? It is also sometimes called Golgatha. A lot of people who broke the law were crucified on that hill. This hill is refered to a lot in the new testement. In the bible there were three crosses one for Jesus and two for people who brkke the law, somewhere in the bible it says that Jesus forgave one of the men of his sins and welcomed him into heaven. 31° 46′ 43″ N, 35° 13′ 46″ E. Gage

P.S. call me crazy but I don't see a bowl of soup. weird

This weeks W.I.T.W. is Golgotha, or Calvary. Golgotha is a skull-shaped hill. It is located in Jerusalem and it is where Jesus was crucified. He was also burried there. It ties in with Easter because we have the holiday of Easter so we can remember how Jesus died and how he died for us, and this is the place where he gave up his life for us.

And thanks for the clue Mrs. O'Hara, It really helped. :D

Golgotha Calavary hill
this is the place were Jesus along with two others before him, was brutally nailed to a wooden cross wich was probably a tall tree stump with a board of wood attached to it.
I think the place near it that they called a skull might be the cave where Jesus was burried. Because Jesus let himself be painfully killed we now can hopefully go to heaven (ya I just started a scentence with the word BECAUSE so wat). latitude 31° 46' 45" N. and longitude 35° 13' 25"
Easter is when Jesus was resurected and some people celebrate it by searcheing for eggs but i realy don't know why at all!

Golgotha Calavary hill
this is the place were Jesus along with two others before him, was brutally nailed to a wooden cross wich was probably a tall tree stump with a board of wood attached to it.
I think the place near it that they called a skull might be the cave where Jesus was burried. Because Jesus let himself be