The Importance of The Hubble Telescope 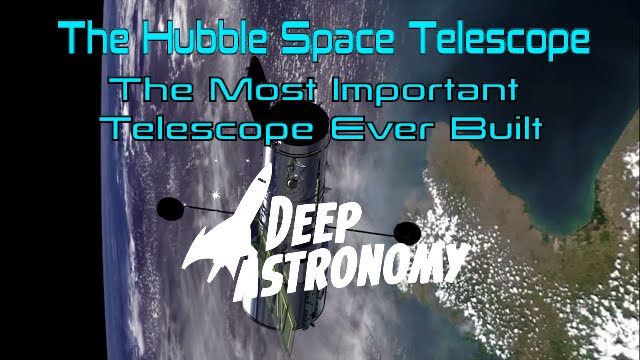 Open the above link and watch the video.  Tell me why The Hubble Space Telescope is so important in the history of space exploration. Work with a partner and create a googledoc. When you are done compare your response with another pair of students. Work together to prepare one final document to post.
Posted by anotherfinekettleoffish at 4:37 PM

Hubble Space Telescope
By: Sam, Austin and Noah
The Hubble Space Telescope is very important to space exploration because in just one picture you can see galaxies that were made when “The Big Bang” happened if you see a tiny dot in the picture it is a galaxy The Hubble Space Telescope was launched in 1990 and it is still up today. The Hubble Space Telescope can see 12 billion light years deep! It was Robert William’s idea to take pictures of places that weren’t in the Milky Way. So they settled on a spot right on top of the Big Dipper. If you hold a pin at arm’s length, that’s how much area they are looking at.
Before they got good pictures, the Hubble Space Telescope was sending blurry pictures back to Earth. NASA was made fun of for this mistake that they made. They brought it back to Earth to fix it and sent it back into orbit. Happily, the mistake was fixed and they got about 350 pictures of the Hubble Deep Field that were clear.
Scientists can learn so much from these pictures like different shapes of galaxies, different sizes, when the galaxy was made, a solar system like ours; a Sun, a place to live and new places to explore. In the video it said that looking at this picture and seeing the galaxies from billions of years ago is like taking a picture of Earth and seeing the Pyramids of Giza at the front, a Neanderthal a little farther back and then dinosaurs at the very back. The great thing about it is that it changed astronomy. Before everyone kept every bit of knowledge to themselves, But now they share every thought that they have to the public.


The Hubble Space Telescope is a space telescope that was launched into low Earth orbit in 1990, and it is still operational to this day! The Hubble telescope can see more than 12 billion light-years deep. The telescope collected images of galaxies as they appeared millions and billions of years ago. Since light can only travel so fast, the telescope is a peephole into the history of the universe. The Hubble Space Telescope is the most important thing in space astronomy. It’s the most essential object to explore outer space. It has collected many good photographs but the most important is this one.

This one is called the Hubble deep field. We can learn a ton from this picture even though it’s small and only takes up 2.6 arcminutes we can learn a lot because they are cluttered with tons of information we can find galaxies with just one picture. For a long time astronomy has been if you get info you just keep it to yourself and analysing it, but The Hubble Deep Field shared it as soon as they got the data, it’s shown in tonnes of papers. Robert Williams became the director of the Hubble Telescope in April 1990.

Before Robert’s team was successful the telescope produced blurry images for nearly three years due to a flaw in the main mirror. N.A.S.A was then made fun of and was used in the newspaper’s comics as jokes. N.A.S.A sent astronauts on a 5 day mission to fix it and it worked. Today The Hubble Deep Field Telescope is admired by many and is a pillar of moral strength. Note:1°= 60 arcminutes.

The Hubble Space Telescope is a telescope that was launched in April 1990, and has been a great help in research and discoveries about space since then. It has sent back many breath-taking photos, one of which was truly phenomenal. The photo is called “Hubble Deep Field”. This picture helped astronomers study the evolution of galaxies, and helped them re-estimate the amount of galaxies in total. The light from some of the galaxies in the photo has been travelling for 12.2 billion years, only a billion and a half years after the Big Bang! This picture not only changed astronomy, but our perspective on the history of the universe.

Usually, satellite pictures are aimed at a known star to study it, but the photo, “Hubble Deep Field”, was aimed at nothing in particular. To add on to it’s originality, it was one of the few photos of space that was released immediately (most astronomers kept the photo to themselves for as long as they are entitled to, to fully analyse it). After Hubble Deep Field was released immediately, the amount of people who released photos from satellites right after they received it greatly increased.

The Hubble Space Telescope (launched into space in 1990) this telescope is important because it takes pictures of different galaxies to help us study, understand, and learn more about the universe.

The Hubble space telescope’s camera looks beyond what we can travel to, and see far and wide studying stars and galaxies, it took lots of pictures but one of the most amazing picture was 1995, and it was the Hubble deep field.


This was an image of the universe’s entire history! All the little dots were galaxies close to the Big Bang the light travelling to earth is from when the Big Bang happened. All the clearer ones were younger, So basically the closer the galaxy the younger, the further away the galaxy the older. Complex right?


Fun fact: the smallest galaxy in the photo dated back to 12.2 billion years ago!


The reason they took the Hubble deep field was to see how far Hubble could take pictures. So, Robert Williams (the director of this telescope) pointed it to a plain, insignificant, teeny patch of sky about as big as the tip of a pin at arms length.


To take this picture They had to put it in the exact right position so when it goes around the earth every hour it would not be blocked by anything so they were able to take the picture.


After spending two million dollars for twelve years one of the mirrors had a flaw, so the Hubble telescope sent back blurry images for 3 years! Then N.A.S.A sent astronauts on a five day mission to connect a module that would fix this problem, and sure enough it worked!

The Hubble Telescope was a telescope that takes pictures of space. It took a very famous picture in 1995, called the Hubble Deep Field. The Hubble Deep Field was a picture of a whole bunch of galaxies through time. The Hubble telescope was sent into orbit in April 1990. The Hubble telescope was sent into orbit to take a better look at stars and constellations that we already discovered. They usually used Hubble to look and take pictures of certain thing in particular. Robert Williams, the former director of Space Telescope Science Institute in 1993, decided to point the telescope at nothing in particular. Although he did not know what they would see, Robert Williams wanted to see how well Hubble could “survey different galaxies.”
Over 12 years, NASA spent over 2 billion dollars to build it. Later on, for 3 years, The Hubble was taking blurry pictures because of a flaw in the main mirror, so NASA sent astronauts on a 5 day mission to install a module to fix the problem and it did!

In 1995, Williams team started planning the Deep Field observation. First, they had to figure out where to point the telescope. They wanted to see much farther than our galaxy, so the spot needed to be nowhere near the Milky Way, any known galaxy clusters and anything bright to cover the view. For the observation to be continuous, the location had to somewhere that wouldn’t be hidden when Hubble goes around the earth, which it does every 96 minutes.

The field of view for the picture was very narrow, 2.6 arcminutes to be exact. 1 degree equals 60 arcminutes so the patch of sky was tiny, “little larger than a pinhead at arms length.”

The observations started on December 18, 1995. Over the next ten days they started taking pictures of this spot, collecting four different wavelengths and by the time they were done taking pictures, they had 342 pictures taken. The data increased the estimates of the amount of galaxies there are. They allowed researchers to look at the history of star formations throughout the universe. They also helped confirm the “Bottom Up” theory. This was confirmed by showing galaxies that are “small and irregular”They thought that they could find more spots like the deep field where they could find a bunch of new discoveries. 2 years later, they tried with another tiny spot in the Southern Sky.

The culture of astronomy changed because of the Hubble Deep Field. “Until this time, astronomy had a history of people taking the data and keeping it all to themselves until they've fully analyzed it. After all, this is intellectual property.” -Robert Williams.

A servicing mission that installed more advanced cameras, allowed Hubble to take even deeper Deep Field images. Those images were also released to the public

Hubble changed astronomy. From this observation, it changed the culture of astronomy of not just looking at an exact star or galaxy but more than that, a whole new discovery.