The only rule is this:
You need to be back for school in September.
Now for the challenge -

You have to plan the most amazing summer vacation ever.  Imagine you have no budget restrictions and you have a private plane at your disposal.  Where would you go and what would you do? Post your responses. 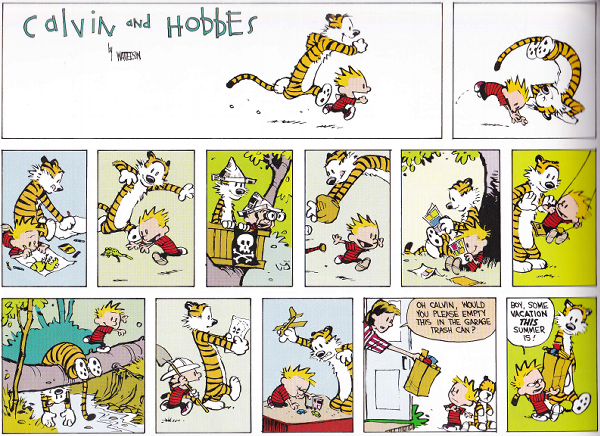 Posted by anotherfinekettleoffish at 4:16 PM

On my summer vacation if I had no money limits and a private plane that I could use at anytime I would do a lot of stuff.
First, I would buy concert tickets to the Justin Bieber concert on July 26th, even if I’m already going to the July 25th concert. I would also buy Meet and Greet tickets so I can meet Justin Bieber. Then after that I would buy a bunch of movies and watch them on a big TV I also bought. I would buy a new laptop and a bunch of Apple products. Then I would go to every province in Canada and buy Maple Syrup. Then I would find a moose and name it Moostacho. Then I would give it wings and a unicorn horn, then Moostacho would be Moostacho the Moosapegapony. I would fly Moostacho all over the world and eat pancakes with Maple Syrup while flying on Moostacho.
Me and Moostacho would save the world from all things evil. We would meet all the Avengers and help them defeat Loki, again. Then we would become best friends with all the Marvel superheroes and then Tony Stark would give me and Moostacho Iron Man suits to wear on our adventures.
Then Moostacho and I would fly to Equestria and I would de throne Princess Celestia and become best friends with her. I would walk into the Crystal Empire with my Iron Man Suit holding a mandarin orange and tell everyone, “I defeated The Mandarin!” Then they would be happy but I would tell them I’m not Iron Man and it was just an orange and I ate it for breakfast. Then I would make my own Element of Harmony, the Element of Cray Cray. I would take my Element of Cray Cray crown and put it on top of my Iron Man suit. Then I would go to a Justin Bieber concert in August and sing with him and then Moostacho would come on stage and dance with me. We would do the Macarena for all the Beliebers and then I would fly out of the place and go home and watch a movie.
Then in August Moostacho and I would go fight crime for the whole month but I would stop every night to go down people’s chimneys and eat milk and cookies and in the daytime I would eat ice cream and have an intense bonding experience with Moostacho because when we eat the ice cream he’ll tell me all about his childhood.
Then at the end of the summer I’ll go on the interwebs and make a Wikipedia page for myself and all about how I’m a superhero/singer/dancer/Element of Cray Cray.
And when I’m not on the interwebs, or dancing and singing with Justin Bieber, and being the Element of Cray Cray I will be falling down and hurting myself like I always am.
THE END

If I had Infinite funds and a private jet for summer, here is a list of things that I would do.

The first thing I would do is hire a kindergartener teacher to go to Valve.co and teach Gabe Newell to count to 3, so I would be praised by nerds world over, for the 3rd installments in series such as Half life, and portal. Also maybe I would buy all of the game companies I the world, except for the ones in Japan.
The next thing I would do is ban turtles from living, by buying the entire world. I would make all crabs national animals, and also buy the moon. I would burn my face into the moon with a laser, so everyone would see it haunting them before bed.
After that I would buy myself the job of president of the world, and make annoying pop-stars do all of my paperwork. I would hire scientists to make me super powered, with the power of growing potatoes on annoying people’s faces. Then I would make all schools only teach gym. Anyone who disagrees with me gets sent into space!
Then I would have a wonderful trip into space, with my money ship, and went to shameless copy of a popular movie planet and hung out with blue people and dinosaurs. Then I would go onto a planet during war and explode it with a bomb made out of money. Then I would be told that earth is in war, and explode most of it, and replace the exploded part with a virtual reality world.( nobody was hurt, everyone was in space at the time… hurting each other.)
Next I would make all of earths inhabitants were I am a lemon shirts. Finally I would go to Hawaii, which is what my birth mark is shaped like, it is a sign! Then I would go to what is left of school and play dodge ball. The end

My Amazing Summer Vacation Plans…
Katherine
Wednesday, June 26, 2013
Over my summer, I would visit my grandparents, family and friends. I would fly to Colorado and to Illinois. In Illinois, I would play at my grandparents’ houses. I would sleep in and relax. Also, I would go to church.
After spending a month in Illinois, I would fly out to Colorado. I would go swimming in the hotel pool. I would spend a half month seeing my friends and playing at their houses and at parks.
With the other part of the month of August still open, I would fly back to Burlington and play with my other friends. We would go swimming altogether a water park.
Throughout the whole summer, I would have a personal servant who would bring me and my friends our meals and who also would drive us and fly us around.
My summer would be quite simple, but enjoyable.
Note: During my summer, I would be staying in the fanciest hotel that brings your meals up to you on a gold platter. The hotel would make your four-poster bed, do your laundry, take care of your entire luggage, and have crystal chandeliers. It would also have marble floors.

If I had infinite money and a private jet, I would do many things...

I would, first and foremost, buy the universe so I have ULTIMATE CONTROL OVER EVERYTHING THAT LIVES. Then I would eat a burger. After that, I would get a new supercomputer, with 500000000000000000 TB of RAM, and 999999 TB of RAM dedicated to video. Then I would buy myself a new microphone, that only picks up my voice. Then I would make thousands of youtube videos. After that, I would travel to the Marvel Universe and eject radioactive waste into my bloodstream, because EVERYONE knows that radiation =super powers in Marvel. Then I would steal a Iron-Man suit, and put it on a monkey (because who wouldn't?). I would name the monkey Chuck, because that sounds funny... (CHUCK THE IRON-MAN MONKEY FROM SPACE!)

Next, I would go to a personal island in the Pacific Ocean, and start to come up with all the new laws for my new Universe. The new laws are:

1. Thou shall worship crabs, turtles, and ME!

2. Whenever you hear my name, you must say 'I LIKE LEMON TARTS AND CHUCK THE MONKEY.'

3. You can not have fun. EVERRRRRRRR (Dramatic trailing of the word 'Ever.').

4. You must always speak in an Australian Accent or a British Accent.

6. THOU SHALL NOT PASS (your exams)

After coming up with all these rules, I would use my super-powers to fly into space. I would meet Luc Hewwit there, and argue about how to rule the world properly. Then, we would have a laser marshmallow battle.

Finally, I would return to school and become the top student in life.

-THE END FOR EVERRRRRRRRR-

If I had unlimited money and a free plane I would:

1. Fly to the United Kingdom

3. Visit my relatives in England

6. See some of the many museums

If I could do anything during summer vacation, I would first go on a tour around the world, and visit new places that we’ve never been before, like China, France, Australia, and much more! I would travel in my sparkly orange private plane with all my friends, and take lots of pictures. We would stay each night in the cottage at the back of my plane. (Because it’s that big, don’t ask me, I didn’t design it!!!) After that, I would take all my friends on a cruise with me. Once we have returned, we would go to Marineland and grab all the animals and put them somewhere where they will be safe and cared for. After that, we will buy all the rides and put them in a huge field that we recently bought. We would open it so anyone could come, and have a huge party. I would buy all my friends that don’t have one an iPod. After that, we would make a presentation of all our adventures. Once we completed that, we would all play Minecraft together. Once summer has ended, Mackenzie, Beth, Katherine, Amanda and I (Olivia, Lindsay, and Kove would be there too because Mr Martin allowed it!) would come to Mrs O’Hara’s class with a USB having our presentation on it( and present it!), and we would give Mrs O’Hara her presents from our trip around the world (of course we wouldn’t forget her!). We would have all our supplies ready, all of them the highest quality. Olivia, Lindsay and Kove would go back to Mr Martin’s class, and Mackenzie, Beth, Katherine, Amanda and I would start the new school year in Mrs O’Hara‘s class!

You need to be back for school in September.

You have to plan the most amazing summer vacation ever. Imagine you have no budget restrictions and you have a private plane at your disposal. Where would you go and what would you do?

If I had no budget restrictions and a private plane at my disposal, the first thing that I would do is go on a pirate cruise to Florida. Once I get there, I would go to the Wizarding World of Harry Potter. Then, I would buy every souvenirs as possible (only hufflepuff themed scarves and things like that). After that, I would go on every harry potter ride( I would also stay for like 3 weeks).

June 28th: Go to germany to see where I was born, be a tourist and buy souvenirs
July 19th: Travel to Mackay, Australia randomly (I don`t know why I want to go there)
July 26th: Travel to Beijing, China
August 2nd: Travel to the moon in space ship, and put the Mackenzie flag on the moon
August 23th: Invite my friends over for a party (a world-traveling party)
August 25th: Go to Florida
August 31st: Get school supplies and IPhone
September 4: go to school, when teacher asks what you did on summer vacation, say ``Nothing really...``

I would also meet all of the Harry Potter characters in person.
- Beth

Olivia,
You have quite an imagination. Your last line made me laugh out loud.
Mrs. O'Hara