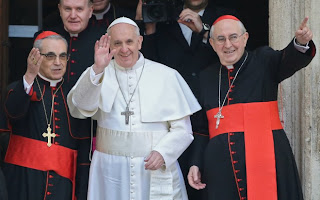 http://vimeo.com/61825778
Open the above link and watch the video.  What are the qualities Pope Francis is said to possess?  Pope Francis is the first Jesuit Pope.  What is the Jesuit motto and what does it mean? (Post your answer. Make sure you provide support for your answer.)
Use the following sites to research the Jesuits -
http://encyclopedia.kids.net.au/page/je/Jesuits
http://www.catholic.org/saints/saint.php?saint_id=56 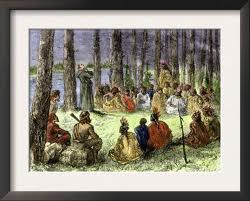 What does the above image have to do with the Jesuits?

﻿
Posted by anotherfinekettleoffish at 2:23 PM

The qualities that pope Frances possesses is wisdom, simplicity and he is very humble towards people going threw poverty. Jesuit means that they are missionary that spread the word of catholicism. I think this picture shows a Jesuit preaching the word of God to a group of people.

The qualities that the newly decided Pope Francis possesses the qualities of simplicity and wisdom. Another quality is kindness to those who go through poverty and other bad things in the world. The Jesuit Motto is 'Ad Maiorem Dei Gloriam' or, in English, 'For the greater glory of God.'

I think some of his qualities are being kind to the less fortunate, beingvery smart, and all-knowing( in some ways.The Jeuits are a roman cotholic churches male group who worships jesus and god. there motto is"Admaiorem Dei gloriam" which means Glory. The picture is of a Jesuit Priest who is preaching to agroup of indians, and other people.

(Continuation) The motto of the Jesuits is Ad majorem Dei gloriam ("to the greater glory of God"). The Jesuits are a group that was started in August 15,1534 by St. Ignatius of Loyola. He was born on December 24, 1491 and he died on July 31, 1556. He was a soldier fighting the French. His soldier days ended when a canon ball hit his leg and broke it. In his free time he started to become very interested in the Catholic religion. In university he created a group called the Jesuit or the company of Jesus. He travelled to Rome with six companions to get approval for their order (Jesuit). Pope Paul II officially permitted them to be ordained priest on September 27, 1540.

Pope Francis is said to possess the qualities of simplicity and wisdom. He also shows that being the Pope isn't getting to his head. He isn't showing that he is stuck up or haughty. The Jesuit motto is "Ad Majorem Dei Gloriam," (a Latin phrase). It means "for the greater glory of God." The picture is of a Jesuit priest preaching to a group of Indians. One of the above sites says that " The Jesuits were often the only thing that saved the Indians from slavery".

The qualities Pope Francis possesses are wisdom and simplicity. He is the first Jesuit pope. The Jesuit's motto is "Ad Majorem Dei Gloriam" and it means for the greater glory of God. The picture is a Jesuit priest talking to a group of Indians.