http://goo.gl/iM6z8k
Open the above link and explore the Top 10 New Species for 2014.  Out of the ten species that were chosen which one do you find the most interesting?  Explain why. 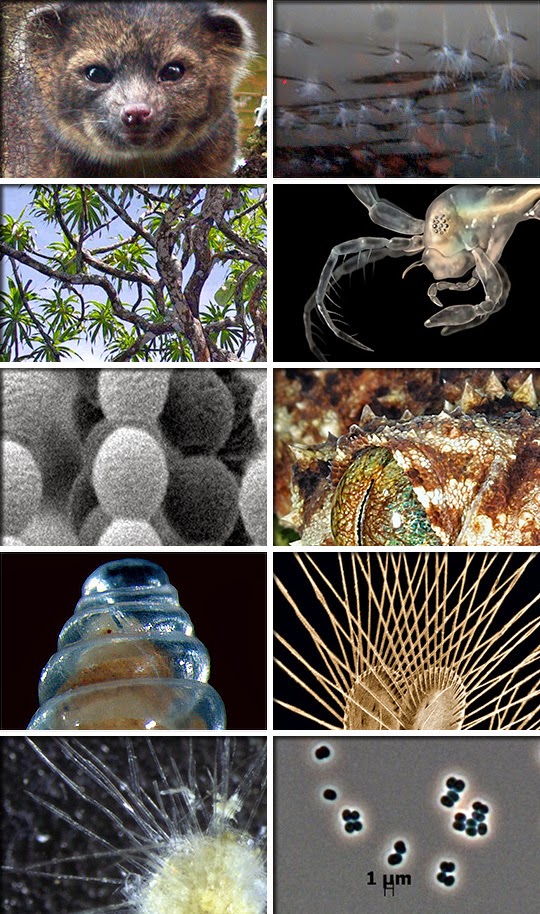 Posted by anotherfinekettleoffish at 12:27 PM

From all of them I like the Domed Land Snail the most. I've always liked snails and this one is now my favorite.
I like it's ghost-like appearance, I did more research on this snail and they are very interesting. They are really slow for a snail, "travel in water currents or hitchhike on other cave animals, such as bats or crickets, to travel longer distances.(http://goo.gl/QVKeQk)"

Out of all the new species of 2014 listed I like the leaf tailed gecko, having two of my own when I first saw it I knew it was my Favorite. I like it's coloring and I also like the way it camouflages into the grassy terrain and mossy rocks in it's habitat. I also think its cute, but too bad it is native to Australia. It shares traits like my geckos, big eyes, spiky like body and tail,and being nocturnal. I also like the skeleton shrimp and the dragon tree.

Out of all the species on that list, I like the ANDRILL anemone because it is very interesting. It is very interesting that an anemone can live in cold and frigid conditions in the Antarctic where temperatures reach more than -70 degrees Celsius at some points. I also wonder what food it eats, because it could be different from other anemone.

I thought that the Clean Room Microbes, also known as Tericoccus Phoenicis, were the most interesting because they are so small yet they are living things. It’s cool that they are living right under our feet especially where spacecrafts are built and that they can also tolerate extreme conditions. - Lucas

My favourite animal on that list is definitely the leaf tailed gecko. I love the way it's tail looks just like a leaf! Plus, geckos are already my favourite lizards anyway. It is so cool how they can climb on smooth surfaces where there is nothing to grab. I'm also a big fan of camouflage. When I first saw it, I thought of chameleons, because they're both camouflaging lizards. It also reminds me of a thorny devil, another spiky lizard that also lives in Australia. It's super-cute, too!

The Olinguito was pretty cool too!

Out of all of them, the one I like most would have to be the Kaweesak’s Dragon Tree. It's cool how tall it is, and funny how they didn't notice it until now, considering how tall it is. I really like the beatiful colours, and how it stands firm, yet flows calmly in the wind is really cool. It's also cool how it has the word "Dragon" in it, because we are talking about things o earth that could be realted to the dragon. I wish that there were some over in Canada!

Room 11 - I find it so interesting that new species are being discovered (probably as I write this). It is nice to see that some of you are doing further research on some of these new species.
I always enjoy reading your responses.
Mrs. O'Hara

Out of the ten species, the one that I found the most interesting was the skeleton shrimp.

It’s kind of weird but cool/interesting at the same time! What I like about it, is that it’s kind of see - through, which would make it camouflage in the water.

http://www.chesapeakebay.net/fieldguide/critter/skeleton_shrimp
Skeleton shrimp can be found on sponges, and hydroids, on bay grasses in shallow waters also in the lower, and middle of Chesapeake Bay.
They can grow to 2.54 cm. - 5.08 cm.
They use their front legs to capture food like algae, detritus, and copepods
They say females live for one year and some will kill the male by stabbing him with venom from a poisonous claw, after mating

I like shrimp. They taste really good. I wonder if these guys do too. Probably not though because, I think they have venom in them!

I also want to say that geckos themselves are also really cool and are an amazing species of animal!

Kaweesak’s Dragon Tree
My Favourite species was the Kaweesak’s Dragon Tree, because it is beautiful, and big! It’s almost 40 feet tall! It’s interesting how they couldn’t find it all these years, maybe it just has very good camouflage! I really like the colours on the flowers, and the petals have a nice shape too. I wonder if they can be used for anything, or used in anything?

My favorite would have to be the Tinkerbell Fairyfly (Tinkerbella nana)I find that it's very interesting that it only lives a few days, and the look is very wasp like and eerie. The thing that I like the most about it is it's hair like wings, I don't know about you, but I think it's very beautiful.

MY other favorite is the dragon tree and the skeleton shrimp!

The most interesting creature I found was the skeleton shrimp, because its skin is see through, making you able to see its bones, and it is a really small animal that measures only about 2 - 3 millimeters high. I also thought that it would be found somewhere very deep underwater when I saw it and its name. Now that I imagine it in a cave in south california, it seems like its a creature that doesn’t move, for example, a starfish. Something that I’m wondering is if the little dots by its head are eyes or if they're not.

Out of all the species, my favorite is the Olinguito because it is an animal that lives in forests, and I like forests. Also, it is in the same family as racoons, and both the Olinguito and racoons look like cats, and I really, REALLY love cats. And the Olinguito looks so cute! Okay, it is carnivorous, and would probably attack you, but it is really cute!