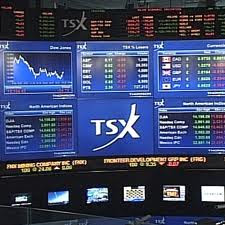 Posted by anotherfinekettleoffish at 2:34 PM

A Daniel once said...

It is listed as the largest stock exchange in Canada, the third largest in North America and the seventh largest in the world by market capitalisation.

The Toronto Stock Exchange likely descended from the Association of Brokers, a group formed by Toronto businessmen on July 26, 1852. No official records of the group's transactions have survived.

3 things
! I have to do it today before I go away + bye
@ cool new backround
# WITW
By Gage Jones
05.10.11
this weeks WITW is the Toronto Stock Extange

It is in Toronto Ontario

It is owned by the TMX group

Tom Kloet is the CEO

Wayne Fox is the chairman

1,498 companies are listed on the TSX

Where in the world
The where in the world this week is the Toronto stock exchange, located in Toronto, Ontario, Canada. It is the largest stock exchange in North America, which is quite the accomplishment. To add to that it is actually the 7th biggest in the entire world.
Did you know that the longitude and latitude is 43° 38′ 54.09″ N, 72° 22′ 59.75″ W, it was first founded on the 18th of October 1861, that would mean that the company had its hundredth anniversary on the 18th of October in 1961! Tom Cloet is the CEO for the company and Wayne Fox is the chairmen and their employer is the TSX group. The trading hours are 9:30 (a.m.) to 4:00 (p.m.). There are 1, 948 companies associated with the TSX. This stock exchange is the dominate leader of the mining, oil and gas sector, and they have more supporting company than any other stock exchange in the world. Some of the banks they support are; CIBC, Bank of Montreal, Bank of Nova Scotia, Royal Bank of Canada and the Toronto-Dominion Bank. The stock exchange has originated from an association of brokers, formed by some Toronto buissness men on July 6th 1852. On October 25, 1861, the twenty-four men gathered at the Masonic Hall to officially create the Toronto Stock Exchange.


-The WITW is the Toronto Stock Exchange

-The Toronto Stock Exchange is the largest Stock exchange in Canada and the third in North America and and the seventh in the whole world.